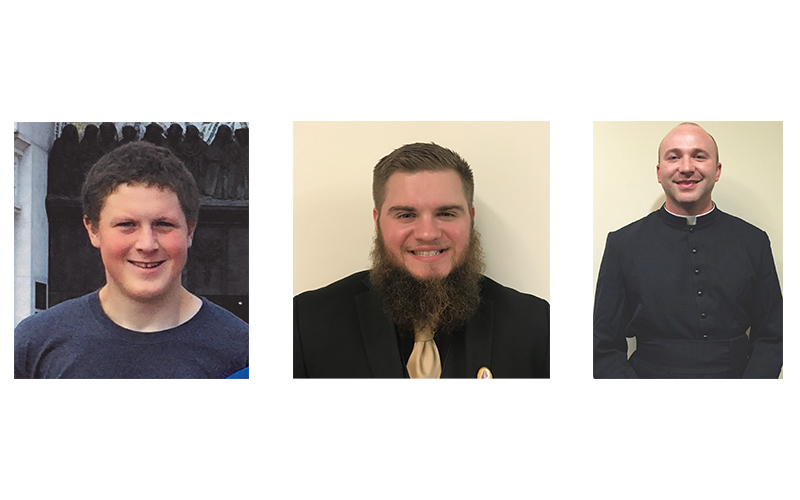 Ed Burke
Born and raised in Alaska (Kenai), Ed graduated from the University of Saint Thomas (Saint Paul, MN), with a Bachelor’s Degree in Philosophy and Religious Studies. He has been in formation for four years at the Saint John Vianney College Seminary located on the University grounds. Homeschooled and the oldest of 12 children, Ed thrives on hunting, fishing, trapping, shooting, and hiking. He admits that his mom instilled in him a great desire to be a saint and this desire to be a hero for Jesus inspired him to start thinking about the priesthood when he was about 12 years old. He writes, “I had served at the holy sacrifice of the Mass since I was small and the Mass was the high point of each week. My time in seminary has been blessed with tons of opportunities to share the love and hope of Jesus with people. Teaching faith formation to elementary school kids, leading small groups in campus ministry, making friends with the homeless, praying and offering help outside of abortion clinics, and working with Mother Teresa’s sisters in India are all ways that I’ve been able to touch people’s lives and hopefully let them encounter Christ.” Ed is slated to begin a retreat and follow-on graduate studies in theology at Mount Angel Seminary in Oregon at the end of July. God willing, he will be ordained a priest in 2025.

Luke Daniel
Luke graduated this past May from Mount Angel Seminary. Luke graduated with an undergraduate degree in philosophy after spending three years studying as a seminarian for the Diocese of Juneau. He will begin his major seminary studies in theology at Mount Angel Seminary in the fall. Luke will spend the summer with his family in Washington state, working with his father in the construction business. We wish Luke the best of luck in his future studies and we will keep him in our prayers that God may always bless him and his education and future ministry.

Madison Hayes
Madison completed his Baccalaureate in Sacred Theology (STB) at the Pontifical University of Saint Thomas Aquinas (Angelicum) in Rome. Residing at the North American College, Madison completed three years of theological studies in June. He has lived at the rectory in Saint Elizabeth Ann Seton Parish, attending his classes via distance learning due to the pandemic. Co-sponsored by the Archdiocese for the Military Services, Madison will complete his summer training with the USAF Reserve as a Chaplain Candidate at JBER. Madison is on track for ordination as a Transitional Deacon in Rome on October 1, 2020, subject to a “call to orders” by Archbishop-Elect Bellisario. In reflecting on his formation for the priesthood, Madison muses, “There is no authentic Christianity without an authentic conversion of heart. This is made manifest by deeds, by taking up my cross daily in acts of faith, hope, and charity. Throughout my time in seminary formation, I have been able to dedicate these years to allow God to fashion me into a more authentic Christian for His Kingdom.” Madison hopes to remain in Rome following his diaconate ordination to pursue advanced studies and looks forward to being an ordained priest back in the Archdiocese of Anchorage-Juneau in 2021.