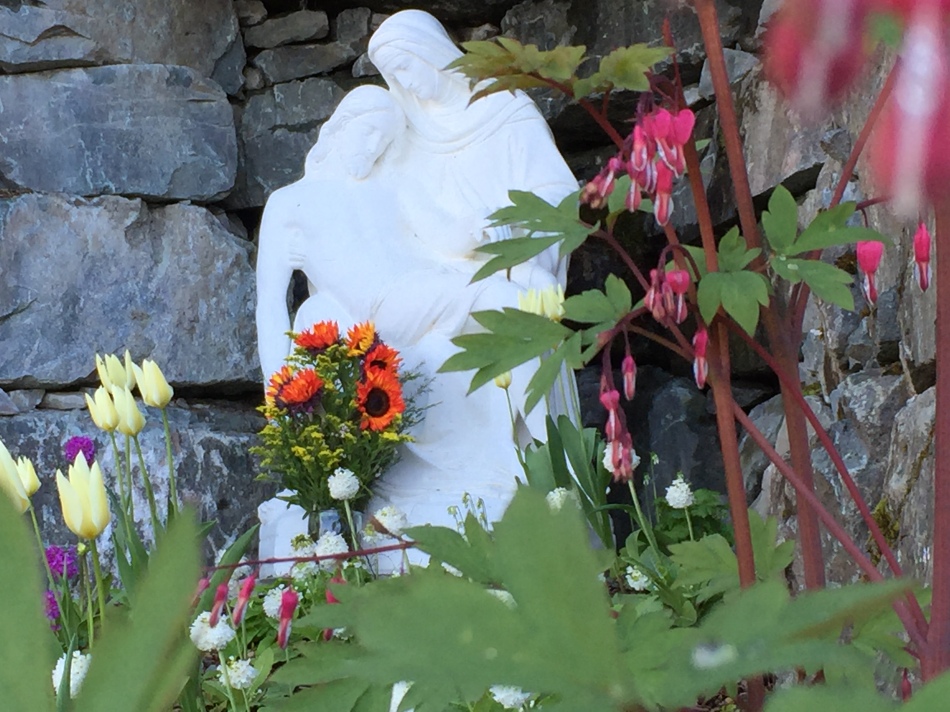 Those who have made a pilgrimage to the National Shrine of Saint Therese know the Shrine provides a peaceful and scenic place of retreat. In much of the beauty, there is symbolism that has biblical significance. The gardens are no different.
In the spring of 1992, Janis Burns Buyarski made a personal retreat at the Shrine of St. Therese with a stay at the Post Office Cabin. At the time she was a Presbyterian deacon in Sitka, but during her retreat she felt God calling her to become a Catholic with a devotion to St. Therese. Little did she know that her passion for gardening would become a ministry that she would share with the many pilgrims who visit the Shrine each year.
In the fall of 1992, Janis and her husband Ed moved to Juneau. That fall she joined RCIA and began her journey into the Catholic church. Initially, she and her husband Ed helped take care of the existing gardens in front of and beside the lodge.

In 1994, the secular Carmelite group in Juneau asked if she would be interested in creating a garden at the feet of the statue of St. Therese outside the chapel. With the help of Ed, the new garden was planted. This was just the beginning of her ministry. “It began to evolve,” she said.
When the Shrine board began working on a master facilities plan in the mid-90s a “Faith, Hope and Love Garden” was proposed for the new columbarium. While planning out the new garden, Janis did an internet search which led her to ideas for biblical gardens and Marian gardens.
“That was the turning point at which it wasn’t just flowers, it was finding flowers and plants that had something to do with a story from scripture or related to Our Lady.”

Janis explained that biblical gardens date back to the Middle Ages, when most people couldn’t read. Monks and priests would use plants to teach biblical stories, and legends of Mary. For example, peonies, were named the Pentecost rose. They received that name because they bloomed near Pentecost, which helped Christians mark the coming of the feast.

Janis has planted many plants with a similar significance that bloom from the spring to fall in different gardens around the Shrine.
At the Columbarium, the first garden is called “The Old Testament.” It has plants named after Old Testament stories, such as Jacob’s ladder, burning bush and viburnum. She planted the viburnum as hedges, because the Hebrew word for paradise means a walled-in-garden, and represents the Garden of Eden (Gen 2:4). Similarly, in the book of Revelation, it ends in a garden where trees produce fruit each month and the leaves are for healing of the nations (Rev 22:2). Burns joked, “In terms of bookends what more could a gardener ask for than to begin in a garden and end in a garden.”
For the Rosary Trail, the plants selected are based on liturgical colors and themes. To represent the Joyful Mysteries flowers in blue, white and pink were selected, based on historical paintings of Mary. On top of the rock wall are planted lilacs, which in the Marian plant tradition represent angels, especially the angel Gabriel who visited Mary at the time of the annunciation.
For the Luminous Mysteries she chose yellow and white for the light or revelation of Christ. The gardens near the Sorrowful Mysteries are filled with red and purple flowers with “a host of weeping plants and thorny plants to go with the passion,” Janis said.
The Rosary Trail ends at the Grotto that shelters a replica of Michelangelo’s “Pieta.” She said she spent a lot of time thinking about what plants would be appropriate for the Grotto, “As I prayed about it I kept seeing the image of Divine Mercy.” So, as you face the Grotto you will see white plants to the right that signify the waters of mercy and red to the left that represent the cleansing blood of Christ.
Twenty-six years since she started her ministry, Janis, Ed and many community volunteers are still working to create gardens with scriptural meaning on the grounds of the Shrine.
She shared that she has struggled with whether this ministry has been for the sake of God or for herself, “I think that’s something every human being has to struggle with. Are the actions in the place that I’m spending my time truly for the glory of God?” It is for this reason that Burns has sought to keep her work at the Shrine for the last twenty-six years unpublicized, to follow the example of St. Therese of serving God in a hidden way.
Now, as she has grown older, Burns wants to share the meaning of the plants and flowers she has planted in hopes that those who enjoy them will understand their significance. With the help of the Shrine’s executive director, Joe Sehnert, Burns has designed interpretive signs for the different gardens that explain the meaning of each plant. The signs will be installed this summer.
Burns intends to continue her ministry at the Shrine. Her next project are the garden berms around the Labyrinth.
Through the summer the Shrine recruits volunteers to help maintain the gardens with their Adopt-a-Garden program. If you have experience gardening and would like to help with this ministry please contact Joe at juneaushrine@dioceseofjuneau.org or call 907-586-2227 x 24.