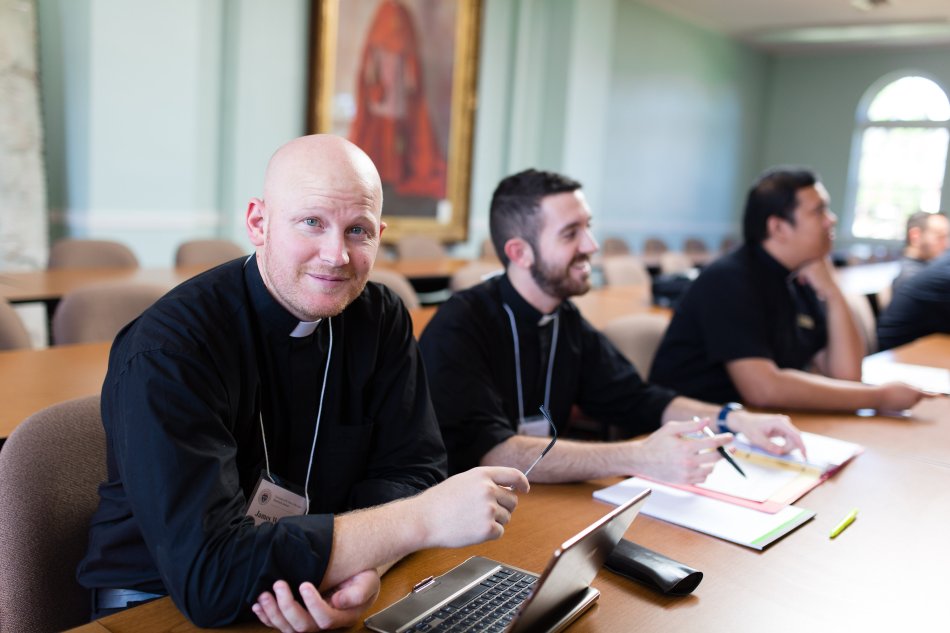 The Diocese of Juneau is pleased to announce that our seminarian James Wallace will be ordained as a Transitional Deacon on Saturday, July 13th, 2019. He will be ordained to the Order of Deacon at St. Gregory Nazianzen in Sitka, Alaska. James completed his undergraduate degree from Mount Angel Seminary in Oregon; he spent a summer and one semester for his pastoral year in parish ministry in Sitka. The following summer he completed a unit of Hospital CPE (Clinical Pastoral Education) training in Los Angeles and is currently finishing his third year of Theology at Mundelein Seminary in Illinois.

Ordination to the transitional diaconate marks the last stage in seminary formation before ordination to the priesthood. Hopefully, this short article will allow you to take a glimpse into the transitional diaconate as well as some differences between the transitional and permanent diaconate. At the ordination, the candidate makes a public commitment to specific promises, namely, obedience to his ordinary (Bishop), maintaining a life of chaste celibacy, and being a man of prayer, specifically by praying the Liturgy of the Hours. By the laying on of hands and the prayer of consecration by a bishop, a candidate is configured to Christ the Servant and is charged with assisting in the Church’s liturgical worship, especially by serving in church ministries, proclaiming the Gospel, preaching, and in performing works of charity.

Given this foundation, the Order of Deacon is understood as follows: A man who is ordained a deacon receives the Sacrament of Holy Orders. However, deacons are not priests: “At a lower level of the hierarchy are to be found deacons, who received the imposition of hands ‘not unto the priesthood, but unto the ministry’” (Dogmatic Constitution on the Church, #29).

The word deacon derives from the Greek diakonia, meaning “service,” thereby indicating that a deacon is called like Christ to be a servant. The Order of Deacon has three essential functions: the proclamation of the Gospel, the service of the liturgy, and the administration of charitable works. In particular, the deacon may assist the bishop and the priests in a variety of liturgical functions at the discretion of the Bishop or Pastor/Priest. Deacons may baptize, witness the exchange of marriage vows, bring Communion to the sick, participate in the Mass and officiate at funerals and burials. They should also dedicate themselves to other charitable works, particularly within the parish community (Catechism, 1569-70, and the Dogmatic Constitution on the Church, #29). At the Mass, the deacon proclaims the Gospel, preaches on occasion under the direction and discretion of the Pastor, announces the Universal Prayer of Intentions, ministers to the celebrating priest, prepares the altar, and distributes the Eucharist, especially under the species of wine (General Instruction of the Roman Missal #94). It is important to note that unlike a priest, deacons cannot absolve sins in the Sacrament of Reconciliation, offer the Mass or consecrate the Holy Eucharist, administer the Sacrament of the Anointing of the Sick, or administer the Sacrament of Confirmation.

Over the course of time, the Order of Deacon within the Church evolved from a permanent state into a transitional period prior to ordination to Priesthood, hence the distinction between a permanent deacon and a transitional deacon. The transitional diaconate became like an internship, whereby a man was ordained as a deacon and made the promise of celibacy, and then continues final studies for the priesthood and serves in a parish for practical experience until the time of Ordination to the Priesthood, which is usually between six months to a year before their Presbyterial Ordination.

Several similarities and differences exist between transitional and permanent deacons. Transitional deacons make the promise of celibacy at the time of their ordination. The permanent diaconate may be conferred upon married men as well as single. About 90% of permanent deacons are married. Both the transitional and permanent deacon are the same during liturgical functions; all deacons wear a white alb and a stole that crosses the chest from the left shoulder to the waist on the right side. For solemn occasions, they also wear the Dalmatic (outside vestment). Whereas, the priest wears an alb and a stole that comes straight down around the neck and hangs down the front under his Chasuble, the outside vestment.

The Order of Deacon, therefore, is part of the hierarchy of the Church and an integral part of the Sacrament of Holy Orders. In all, deacons should heed the words of St. Polycarp: “Let them be merciful, and zealous, and let them walk according to the truth of the Lord, who became the servant of all.”