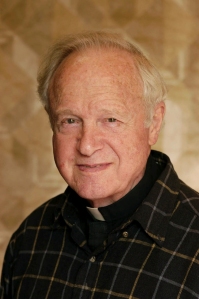 Distinguished Jesuit priest and historian, Reverend Louis L. Renner, S.J., passed away on March 24, 2015, at 7:20 AM, at Gonzaga University Infirmary, in Spokane. He was 88. A Funeral Mass will be celebrated at the Gonzaga Jesuit Residence Chapel at 11 AM, Saturday 27 March. A Rosary will be at 10 AM. Burial is planned for Mt. St. Michael’s Cemetery.

Louis Lawrence Renner, the second oldest of eight children, was born to John J. Renner and Rosa Gustin Renner on April 25, 1926, in Bismarck, North Dakota. He was ordained a priest by Bishop Bernard J. Topel in St. Aloysius Church, Spokane, on June 15, 1957.

During the summer of 1958, Fr. Renner learned he was assigned to teach at Monroe Catholic High School in Fairbanks, Alaska. It was the beginning of a decades-long connection with the state and its people.

In 1961 his superiors directed him to Europe to pursue an advanced degree. In October, he began doctoral studies in philosophy at the Ludwig Maximilian University in Munich, Germany. By the 4th of July, 1965, with doctorate in hand, he was back in Alaska.

In the fall of 1965, Fr. Renner began his 15-year career as a member of the faculty at the University of Alaska Fairbanks. He taught mostly German, but also a course in the humanities and courses in Latin. In fact, he started the university’s Latin program.

In his many years in Alaska he traveled across the state gathering material for a series of books. The first was Pioneer Missionary to the Bering Strait Eskimos: Bellarmine Lafortune, S.J. It was written in collaboration with Dorothy Jean Ray, was published in 1979. Next he wrote the life of Father Thomas P. Cunningham, S.J. Father Tom” of the Arctic, was published in 1985. Others followed, including Alaskana Catholica an encyclopedic look at the Catholic presence in the state.

He began the encyclopedia in February 2002 when he received an assignment to move to Gonzaga University and write a history of the Catholic Church in Alaska. That year he also received the Governor’s Award for Friends of the Humanities, awarded to that individual who has advanced the humanities through life-long efforts.”

In 2005, in his preface to Alaskana Catholica, Fr. Renner wrote: “One of the main intents of this volume is to keep alive for posterity the memory of many major Catholic Alaskan figures—clerical and lay, Native and non-Native, living and deceased—by the recording of their lives and deeds.”

An extraordinarily gifted priest and missionary, Alaskan Catholics will remember him for his books and articles and the influence he had shaping the story of the Church’s presence in the state.

Diocese of Fairbanks Bishop Chad W. Zielinski said of Fr. Renner, “Although I never met him, his gentle spirit, scholarship and passion for Alaska is felt in the chancery and the Alaskan Shepherd office every day. He exemplified the best of the Jesuit tradition and missionary spirit.”

Fr. Renner is survived by his brothers William, Leonard, and Albert, and his sisters Julie McMillan and Della Carlin. He was preceded in death by his younger brother Richard. He will be deeply missed by his many friends, former students, colleagues, parishioners, and brother Jesuits of the Oregon Province.