Day-to-day as an iconographer I can never predict what icon I will be asked to paint for an individual or a church community and where that assignment will lead me spiritually. But what I always can count on is that as with any other experience of prayer and service, it will be an opportunity to deepen my own conversion to Christ and the life of faith.

Over a year ago Bishop Michael Warfel (presently the leader of the Diocese of Great Falls/Billings in Montana, but the previous bishop of our own diocese) had asked if I could paint for him the icon of the Hospitality of Abraham (also known as the Trinity icon). This May I was finally ready to begin work on his icon. I was so sure that I was going to be working on the Trinity icon that I’d gone so far as to cut a wooden panel to the correct proportions and had begun applying the first layers of the white gesso ground to it.
But it turned out that in the meantime Bishop Warfel had changed his mind. This past Lent he had written a pastoral letter to his priests based on “Ladder of Divine Ascent” [The Ladder] by St. John Climacus, so he asked me if perhaps I could paint that icon instead. While familiar with the icon of the Ladder, I only knew the book indirectly from excerpts quoted by other authors.

Not without some trepidation, I agreed to undertake this icon, knowing that I first needed to ground myself in St. John’s text in order to prepare myself for the work. So, I made a new board and without really planning on it at all, this summer I find myself closely studying this spiritual classic of the Eastern Church.

The author of the Ladder is St. John Climacus (John of the Ladder), the 7th century abbot of St. Catherine’s Monastery at the foot of Mt. Sinai in Egypt. Addressed to his fellow monks, the book is divided into thirty short chapters (representing the thirty years of our Lord’s hidden life). Each chapter is a rung on the ladder that begins with the renunciation of the world, continues with the struggle against the passions, cultivation of the virtues and concludes with union with God. 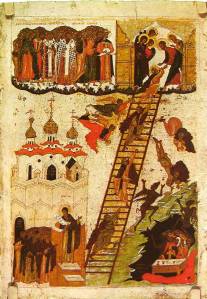 In one corner of the icon, with the monastery of St. Catherine’s looming behind him, St. John Climacus stands at the foot of the ladder urging his fellow monks to begin their ascent to God in Christ. He holds a scroll on which is written the exhortation that concludes the Ladder: “Ascend my brothers, ascend eagerly. Let your hearts’ resolve be to climb. Listen to the voice of the one who says: ‘Come, let us go up to the mountain of the Lord, to the house of our God.’”
The icon depicts a ladder stretching from the earth to heaven. Monks are shown climbing the ladder, urged on and supported by the angels on one side and tempted by demons on the other. At the top of the ladder Christ, with Mary, the angels and the saints, bends down to welcome a monk who puts his foot on the final and last rung of the ladder, which is love. He is followed by monks at the very beginning, middle or almost to the end of the ascent. Some of the monks, enticed off the ladder by the demons are shown falling headfirst towards perdition, where a monk is depicted being swallowed up by the pit of Hell.

The Ladder, although specifically addressed to monks (and nuns) is of great relevance to anyone who is serious about following Jesus as his disciple (which would mean the rest of us.) For this reason many Orthodox Christians and Eastern Catholics read the Ladder in its entirety during the 40 days of Great Lent as they seek to renew their conversion to Jesus and adherence to the gospel.

The opportunity to immerse myself in the Ladder this summer (both the icon and the text) seems particularly opportune in light of the New Evangelization, which begins with the renewal of one’s own faith and relationship with Christ. As the General Directory for Catechesis stresses, “The Christian faith is, above all, conversion to Jesus Christ, full and sincere adherence to his person and the decision to walk in his footsteps.”

This is exactly what the Ladder is all about. It is Christ himself who climbed the 30 rungs of the ladder before us. The gospels teach us that “Jesus advanced (in) wisdom and age and grace before God and man.”(Lk2:52) Embracing every aspect of our humanity because he was fully and completely human, yet without sin, the Lord both grew in virtue and in holiness while contending with every temptation we are faced with.
For me as a disciple, the goal of the ascent is to be made perfect in Christ. Which, of course, is not something that I can possibly achieve by my own effort but which Christ can and will accomplish in me if I cooperate with his grace and make “a permanent commitment to think like [Jesus], to judge like him and to live as he lived.” (General Directory for Catechesis no.53)

The Ladder, which is the journey of every disciple’s life, is also Christ himself, who, like Jacob’s ladder in the Old Testament unites heaven and earth and the divine and the human. For us as disciples, it is in the loving service of our neighbor, especially our neighbor who is in need, our neighbor who is Jesus for us, that brings us step-by-step closer to the Lord. Thus as we ascend each rung of the Ladder that is Christ, we come closer to fully sharing “in the divinity of Christ who humbled himself to share in our humanity” (Prayer for the Preparation of the Chalice, Roman Missal).

Deacon Charles Rohrbacher is the Office of Ministries Director for the Diocese of Juneau. Phone: 907-586-2227 ext. 23. Email: charlesr@gci.net