Alaska Conference of Catholic Bishops Press Release
(Click title for pdf file)
NAC Region XII Mass – Video clip
On Sunday, April 22, 2012, the priests and seminarians of the Pontifical North American College in Rome welcomed the American bishops from Region XII, who are in Rome for their ad limina visit to the Holy See. 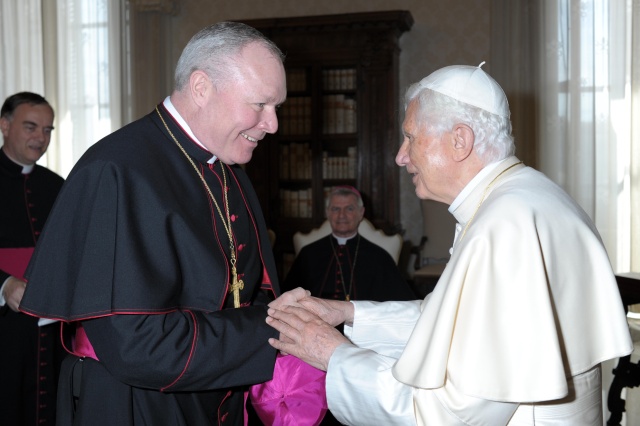 This coming week, with my brother Alaskan bishops, I am a pilgrim in Rome on my first ad limina visit. Ad limina, which comes from the phrase, ‘ad limina apostalorum’ literally means, ‘to the threshold of the apostles’. For over a thousand years, Catholic bishops have traveled to Rome to give an accounting of their work in the diocese. First and foremost we will pray at the tombs of the two great witnesses to Jesus, the apostles St. Peter and St. Paul. We will also meet with the successor of St. Peter, Pope Benedict XVI.

Please keep us in your prayers.

Will deliver report on state of diocese

Anchorage Archbishop Roger Schwietz, along with the Alaska bishops, will report to the pope later this month.

The April 22 – 28 trip to the Vatican will be the bishops’ first ad limina meeting with Pope Benedict XVI—a visit with a three-fold purpose.

“It’s a pilgrimage to the gravesites of Saints Peter and Paul,” Archbishop Schwietz explained of the trip that all bishops in the world must regularly make.
The term “ad limina apostolorum” is a Latin term that means: to visit to the doorpost of the apostles. So in addition to meeting with the pope —the 264th successor to Saint Peter—visiting bishops also celebrate Mass at the gravesite of Saint Peter in the lower levels of St. Peter’s Basilica, and at the basilica of St. Paul Outside the Walls, the gravesite of Saint Paul.
“This is a deeply religious and moving experience,” Archbishop Schwietz said. “It’s spiritually uplifting to pray at the tombs. It’s a spiritual renewal. In our role as shepherds we visit the graves of the earliest shepherds.”

The second purpose is to “renew our relationship with the pope, the Vicar of Christ, and to renew our vow of loyalty to the pope,” he added. “When you’re in the waiting room it certainly strikes you that you are going in to meet with the successor to Peter.”

The third aspect of the trip is for visiting bishops to meet with members of the pope’s staff—the Roman Curia—and explain the state of their local diocese. Traditionally, a bishop travels to Rome once every five years to make a report to the pontiff on the state of his diocese. However, Pope Benedict XVI is a bit behind schedule, and Archbishop Schwietz hasn’t been on an ad limina pilgrimage in seven years. The last was with Pope John Paul II.
Although Archbishop Schwietz hasn’t experienced an ad limina visit with the current pontiff, he did encounter then-Cardinal Joseph Ratzinger in earlier visits to the Congregation for the Doctrine for the Faith, which the cardinal chaired for more than 20 years.

“Our visits with him were the best curial visits we had,” Archbishop Schwietz recalled. “He was very interested and wanted to dialogue with us. And I’ve heard that as pope, he’s very much of a listener.”

However, this time the archbishop will not have a private audience with the current pope as he did with Pope John Paul II. Instead he is traveling with 13 other bishops from Region 12, which comprises Alaska, Washington, Oregon, Idaho and Montana. They anticipate the pope will meet with all 14 together, or perhaps in two groups.

The bishops have already submitted their ad limina reports on their diocese to the Vatican, and Archbishop Schwietz said “the pope will address our individual concerns” with the help of his staff, who have put together responses to each report. Archbishop Schwietz anticipates that recent clashes over religious liberty in the United States will be discussed.
Another benefit of the visit is the opportunity for “good fraternity for us bishops” of Region 12, Archbishop Schwietz said. The three Alaskan bishops, including Bishop Donald Kettler of Fairbanks and Bishop Edward Burns of Juneau, will travel together from New York. Due to health reasons, Archbishop Emeritus Francis Hurley will not make the trip.