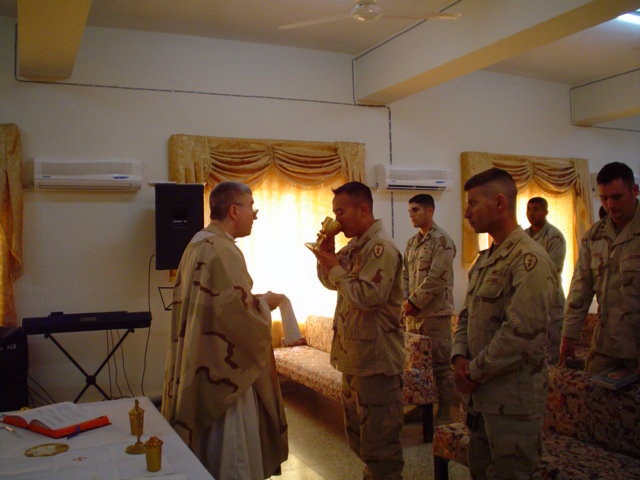 A few days ago, I ended a chapter of my priestly ministry when I met the mandatory retirement date for my service as a chaplain in the United States Air Force Reserve. As some are aware, this was not an event that I looked forward to, but was required because of my advanced age after two special extensions of my service. Now that it has occurred, however, I have welcomed the opportunity to reflect on my 28 years of military ministry with joy and gratitude for the tremendous gift that it has been for me and, I hope, for others.

My association with the Air Force began with my birth at Scott Air Force Base in Illinois, where my dad was stationed and he and my mom had met. As I grew up in the military environment, I encountered Air Force Catholic chaplains whose examples would eventually inspire me to become a priest: Father Eugene Tremblay, O.M.I., from whom I received my first Reconciliation and Communion at a base in England; Father Frank Gilchrist, who ministered to my family when we were challenged by serious illness in Mississippi; and Father William Benson, for whom my brother Bill and I served Mass at the base chapel almost every Sunday for a year, and who shared with us the experiences of his travels in Rome and the Holy Land. These holy men lived out their priesthood in pastoral ministry that directly benefited my family and me with a joy that communicated their close relationship with our Lord. As happens in the military, my contact with them was limited in time, due to the frequency of their transfers and those of my dad, but their impact on my heart has lasted a lifetime.

After my dad retired from the Air Force, and as I completed college and law school and spent more than a decade as a government attorney, I had practically no contact with the Air Force for twenty years. Like so many “military brats” I sometimes missed those aspects of the military environment that had shaped my growing-up years and felt a little out of place in the “civilian” world, but this was overshadowed by many rich experiences of young adulthood, including those which led me to Alaska.

It was after I began preparation for the priesthood in my late thirties that I came to appreciate that some of the spiritual challenges I was working on in the process of formation—especially a certain hesitation in forming close friendships—might be related to the frequent moves and transitions I had experienced as a member of a military family. After all, I had gone to three different high schools as a result of my Dad’s service. It was about this time that I met a lay minister for an Army chapel at an RCIA workshop, and talked with her about this. She enthusiastically confirmed that my experience was very common, and something that was specifically addressed in her ministry to military members and their families. I got the idea that this might be an area of ministry that I should explore.

I was at a Norbertine religious community in Albuquerque, New Mexico at the time, and contacted the priest at Kirtland Air Force Base to see if I might somehow become involved in their ministry. He assured me that I would be welcome, but that I couldn’t just show up to help out in an unstructured way. He then introduced me to the “chaplain candidate” program that the Air Force and the other services run for seminarians who might be interested in being chaplains, and seemed all ready to sign me up and ship me out! This was a bit more than either I or my religious superiors were able to process at the time, but the idea continued to attract me.

Two years later, on May 23, 1991, I was sworn into the Air Force Reserve as a Second Lieutenant chaplain candidate at the United States Embassy in Rome, where I was studying theology. At 39 years old, I just barely met the maximum age limit. For the rest of my years in the seminary in Rome, I was able to minister at air bases in Italy, Germany, the Netherlands, and Turkey, becoming more and more convinced that I had found a true calling. When I was ordained as a priest of the Diocese of Juneau, Bishop Kenney authorized me to continue this ministry as an Air Force Reserve chaplain. Those who remember Bishop Kenney’s views on military matters might be surprised by this, but he made it very clear that his opinions on policy did not affect his awareness of the spiritual needs of those in the armed forces and their families.

Over the last quarter century, my primary assignments have been assigned to active duty and reserve units in Alaska, Washington State, and Florida. Most of my time as a chaplain has been spent ministering to military members and their families at bases in those States under normal—for the military—circumstances, which might be regarded as quite tumultuous by other people. The special pressures of mission requirements, military discipline, training, and long periods away from home and family at work and on travel have constantly raised issues on which the help of a chaplain has been needed. Especially in the years since September 11, 2001, the “operations tempo” necessary to fight two or three wars has been a pervasive source of almost constant stress for many military and family members. This is heightened, of course, during times when military members are deployed overseas, especially in dangerous combat zones, and chaplains are needed to serve both the troops on deployment and their families at home.

I have been deployed to Iraq during the summer of 2004; to the Persian Gulf in the summer of 2007; and to Afghanistan in the fall, winter, and spring of 2009-2010. During each of those deployments I have experienced peak moments of my priesthood: ministering to the dead, dying, and wounded; celebrating Mass and the Sacraments for Catholics living in a country where such things are not normally allowed; and offering Mass while our base was under a rocket attack. Most important has been the opportunity to make Christ present to those experiencing situations of suffering and evil, offering his light in the midst of pervasive darkness. Baptizing and confirming airmen and soldiers who have come to a new awareness of their faith while meeting the challenges of deployment is a memory that I especially treasure. Celebrating a traditional Christmas with faith-filled Polish troops—young men and women—at their base in the middle of Afghanistan was one of many joyful experiences in that challenging but beautiful land.

One special feature of military chaplaincy is its ecumenical, interfaith character. We Catholic chaplains are part of a ministry that includes chaplains of almost every conceivable Christian denomination, as well as Jewish rabbis and Muslim imams. The enlisted troops who assist us come from a wide variety of spiritual backgrounds. (The Army chaplain assistant who accompanied me in Afghanistan identified himself as a Neo-pagan!) We each, of course, are faithful to the teachings and practices of our own faith and, contrary to occasional rumors, are never required to do anything inconsistent with that faith. For Catholic chaplains, the Archdiocese for the Military Services, USA, under the leadership of Archbishop Timothy Broglio, ensures that only qualified priests are recruited for this ministry and governs the ways in which we conduct it. At the same time, military chaplains are at the service of troops and family members of all faiths and even of no defined faith, helping to secure the free exercise of their religion or spiritual practice, whatever that might be, under the First Amendment to the United States Constitution. In the course of my service with the Air Force, I have had wonderful opportunities to collaborate in ministry with priests, ministers, elders, rabbis, and leaders of other faiths in serving all who have come to us for help.

I thank God every day for the gift of having served as an Air Force chaplain and know that it will enrich all the other aspects of my priestly ministry into the future. I’m especially grateful for the many men, women, young people, and children whom the Lord has given me the opportunity to serve. Like the dedicated priests whom I encountered during my childhood, I have usually spent very little time with them, but they have affected me, and I hope that I have affected them, in wonderful ways that will last through our lifetimes and into eternal life.