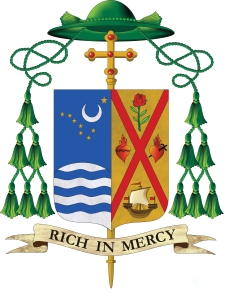 May the grace and peace of our Lord Jesus Christ be with us always!

In an effort to keep you aware of my travels and issues of significance, here are some updates from this past January. January 22, 2018, marked the anniversary of the 1973 Roe v. Wade Supreme Court decision, which legalized abortion in the United States, and many of us gathered on the steps of our state capitol to pray for an end to abortion and to petition our state and national legislatures to extend legal protections to the unborn. I encourage all of us to continue to pray for an end to abortion and to work towards the systemic changes necessary to bring this to fruition. All people are created in the image and likeness of God. We are called to respect all life from conception to natural death.

In other news, early this past January, I traveled to Antigua, Guatemala, to celebrate the 100th Birthday of my host mother, Lolita Monroy Paredes. We gathered in the chapel of the Daughters of Charity at the Colegio Santa Familia with her extended family and several Daughters of Charity. As a new bishop, it was a particular honor to celebrate the Eucharist with her on her special day.

More recently, on January 28th, I joined a celebration in Montebello, California, marking the 200th anniversary of the Vincentians arriving in the United States in 1816 and the founding of the Vincentian Mother House, Saint Mary’s of the Barrens in Perryville, Missouri, in 1818. As many of you know, I am a member of the Congregation of the Mission, commonly called the Vincentians. That is why I have the initials C.M. after my name. The Vincentians were founded in France by St. Vincent de Paul in 1625 to evangelize the poor and to form good clergy. The Congregation grew quickly and was present in several countries by the time St. Vincent died in 1660. Today, the Vincentians are an international congregation with about 4,000 members in many countries, including our own. From the East Coast to the West, from Chicago to New Orleans, and many places in between, with missions in Panama, China, Burundi, Kenya, and Guatemala, among others, the Vincentians made significant contributions to the growth of the Church in the United States, ministering in home missions, parishes, universities, and many seminaries. The Vincentians in the United States have had 15 bishops since 1824, four of whom were bishops who ministered in China.

As we begin this Lenten season, please let us continue to pray for one another, for those

in need, and especially for the most vulnerable among us.