“[Muslims] await the day of judgment and the reward of God following the resurrection of the dead. For this reason they highly esteem an upright life and worship God, especially by way of prayer, almsgiving and fasting.”
– Declaration on the Relation of the Church to Non-Christian Religions Vatican II Nostra Aetate 1965

Although one would never know it from the news reports that are dominated by reports of terrorist violence carried out by radical Islamists, ordinary Sunni and Shia Muslims hold Isa (Jesus) and his mother Maryiam (Mary) in very high regard and in their own way venerate them.

Of course, from the very beginning of Islam in the 7th century, Muslims and Christians have held very different beliefs about fundamental doctrinal issues such as the Trinity, the Fall and original sin, divine revelation, the divinity of Jesus, his salvific death on the Cross and his life-giving resurrection from the dead. 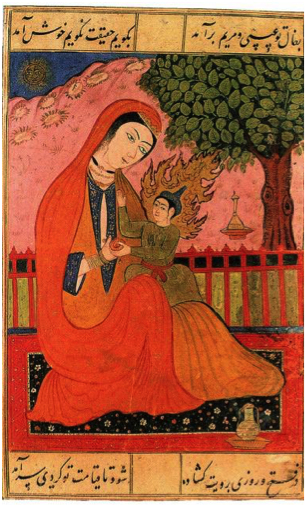 Quranic teaching rejects the doctrine of the Blessed Trinity and does not acknowledge the divinity of Jesus, instead, venerating him as a great prophet, second only to Muhammed in holiness and piety.  In contrast to the gospel accounts, Jesus is believed by most Muslims not to have died on the cross. Instead, they believe a substitute was crucified (various candidates are proposed by different interpretive traditions – Simon of Cyrene most commonly) and died in his stead, while Jesus was taken up into heaven. It is Jesus, Muslims believe, who will return at the end of time, as God’s representative to usher in the Last Judgement.

As for Mary, surprisingly, she is mentioned more often in the Quran than in the New Testament. An entire sura (chapter) of the Quran is named after her. She is regarded as one of the greatest and most virtuous women who ever lived and as an exemplar for Muslims of piety and holiness. Muslims also believe that she was a virgin when she miraculously conceived Jesus by the will of Allah. The Quran contains an account of Mary’s birth, of the Annunciation and the birth of Jesus, but it is a narrative with elements that are derived largely from the apocraphal gospels.

Just as surprisingly, the Catholic Church, while acknowledging our different understandings of God, faith and salvation, hold Islam and Muslim believers in high regard as well. Unfortunately, the violent attacks of fundamentalist Islamist groups such as Al Qaeda and ISIS can blind us to “whatever is true, whatever is honorable, whatever is just, whatever is pure, whatever is lovely, whatever is gracious,” (Phil4:8) in the Muslim world. Islam, with over 1 billion Muslim believers, is one of the great religious, spiritual, cultural and artistic civilizations in our world.

This is not in any way to deny or minimize the very real religious persecution of Christians and other religious minorities in countries such as Saudi Arabia, Pakistan and Egypt. Or, the genocidal violence of ISIS against Christians and Yazidis in Iraq and Syria and the massacres of Shia and those Sunni Muslims who oppose them and are regarded as apostates by that group.

Unfortunately, in recent decades, a ruthless and violent religious ideology, rooted in a literalist and apocalyptic interpretation of Islam has taken hold throughout the Muslim world. Adherents of this ideology, although limited in numbers but recruited from the majority Sunni sect of Islam, have initiated a savage war of terror against Christians, Shia Muslims and civil society around the world.

Increasingly horrific acts of violence by ISIS and allied groups such as Boko Haram in Nigeria against its enemies (defined according to an ISIS spokesman as “infidels, Shia and apostate Muslims”) are part of their overall strategy to create fear, suspicion and civil disorder. Their open and oft-proclaimed goal is to provoke the state and citizens in our own country, in Europe, and in the Middle East to treat all Sunni Muslims as potential or actual terrorists in the expectation that, alienated and angry, Sunnis will themselves be radicalized and support groups such as ISIS.

Thus, as with all of the other atrocious acts by ISIS and allied groups, the sickening murder of the martyred Pere Jacques was intended to provoke ordinary Christians to hate and fear Muslims and to make ordinary Muslims hate and fear us. A truly diabolical strategy, for it is always the devil’s work to turn us against each other.

Yet, what we witnessed in the aftermath of Pere Jacques’ martyrdom was not fear, division and hatred but the opposite: courage, unity and brotherly love. I was deeply moved by the solidarity that Muslims in France showed us as Catholics (and by extension the entire Christian community) by attending Mass the Sunday after Pere Jacques’ death.  The presence of Muslim leaders and faithful at his funeral in Rouen and at memorial Masses in Paris and throughout France was remarkable. It would have been understandable for them to have stayed away. Instead, courageously and at the risk of their lives, these Muslim friends stood with the us, disciples of Jesus within the great French cathedrals dedicated to his mother, Mary.

Entering these cathedrals, Christians and Muslims together passed through the gates of mercy, the mercy of God which is our hope and our consolation in these days and months that have seen so much violence and terror.

May we, through the prayers of Pere Jacques and all those holy men and women martyred for Christ, receive the grace and the strength to witness daily to the mercy, compassion, peace and love of the Lord Jesus.

Through the intercession of Mary, the Mother of God, Queen of Peace, may Christians and Muslims refuse to be enemies, so as to live together in mutual understanding, respect and peace.