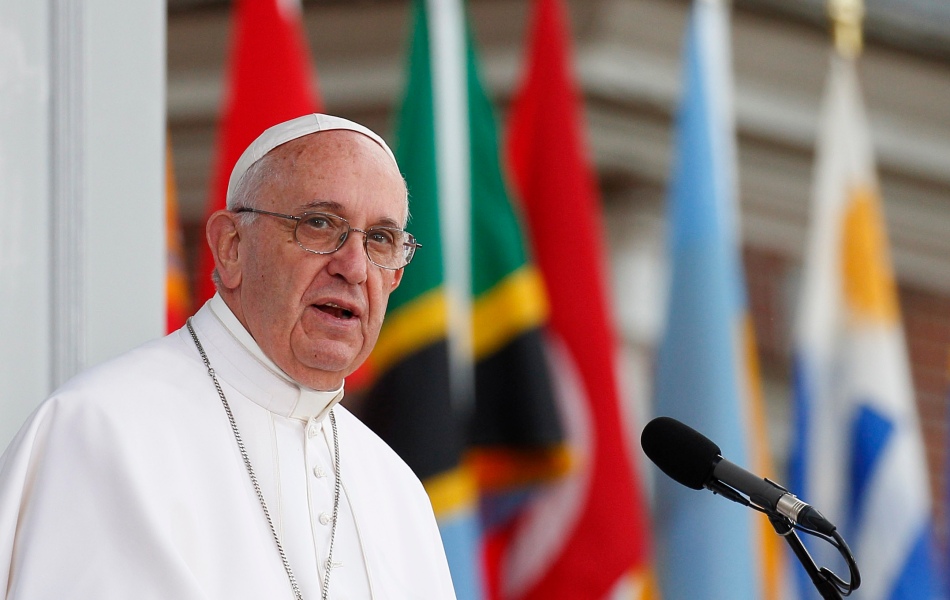 PHILADELPHIA (CNS) — Pope Francis speaks often about memory and motion, the importance of remembering where you came from and setting off without fear to share the Gospel.

That’s what he did in the United States. He circled the Statue of Liberty in a helicopter and flew over Ellis Island not preparing to condemn the world’s great superpower, but to reflect on its history and promise as a land that welcomes people, makes them part of the family and allows them to thrive.

Over the course of six days in the United States, Pope Francis let the U.S. public see who he really is with touching blessings, strong speeches, prayerful liturgies and an unplugged proclamation of the beauty of family life, even when it includes flying saucers.

With constant television coverage and a saturated social media presence, Pope Francis was no longer just the subject of screaming headlines about the evils of unbridled capitalism and a “who-am-I-to judge” attitude toward behaviors the Catholic Church describes as sinful.

Instead, he repeatedly admitted his own failures and reminded people they, too, have fallen short. He urged them to trust in God’s mercy and get a move on proclaiming that to the world — first with gestures and maybe with words.

Sin is sin even for Pope Francis. Human life is sacred at every stage of its development, and that includes the lives of convicted murders, he said during the visit. People are blessed and at their best when they are part of a family composed of a mother, a father, children and grandparents. The well-being of a nation is served by businesses and enterprises that make money, but that do not make money their god.

The pope’s proclamation of the Gospel in Washington, New York and Philadelphia Sept. 22-27 focused on reinvigorating people’s faith, hope, trust and commitment to loving God, serving others and living up to the founding ideals of the United States: equality, opportunity for all, religious liberty and the sacred dignity of every creature — human especially, but also the earth.

Pope Francis had never been in the United States before landing in Washington Sept. 22. He was welcomed to the White House and became the first pope to address a joint meeting of Congress. He joined leaders of other religions in honoring the dead and comforting their surviving family members at ground zero in New York. He addressed the United Nations. And, in Philadelphia, using a lectern once used by Abraham Lincoln, he called for respect for religious freedom and for ethnic and cultural differences.

At home and abroad, Pope Francis scrutinizes people and identifies something good and beautiful in them. He affirms their core concerns, and he challenges them to grow.

For the Catholic Church — in the United States as elsewhere — the key challenge is “not about building walls, but about breaking them down,” as he told the bishops, clergy and religious of Pennsylvania Sept. 26.

From the beginning of his trip — Sept. 19 in Havana — the pope made it clear that with all the important meetings he would have, his primary purpose was to join the celebration of the World Meeting of Families in Philadelphia Sept. 26-27.
And he insisted it be a celebration, not a funeral or a simply a session for rallying the obedient, loyal troops before they set out to battle.

The big challenge, he told more than 100 bishops who came to the meeting from around the world, is to recognize just how many beautiful families God has blessed the church with.

“For the church, the family is not first and foremost a cause for concern, but rather the joyous confirmation of God’s blessing upon the masterpiece of creation,” he told the bishops Sept. 27. “Every day, all over the world, the church can rejoice in the Lord’s gift of so many families who, even amid difficult trials, remain faithful to their promises and keep the faith!”

Tossing aside the text he had prepared for the nighttime festival of families Sept. 26, Pope Francis had tens of thousands of people watching him with awe or with laughter or with tears as he described the blessing of real-life families.

“Some of you might say, ‘Of course, Father, you speak like that because you’re not married,'” he admitted. But he proved he knew what he was talking about. “Families have difficulties. Families — we quarrel, sometimes plates can fly, and children bring headaches. I won’t speak about mothers-in-law,” he quipped.

But mothers-in-law deserve a break and understanding, if one applies the pope’s words to the bishops the next morning and to hundreds of thousands of people gathered on Philadelphia’s Benjamin Franklin Parkway for the event’s closing Mass.

Trust the Holy Spirit, he told the crowds. Recognize that God is at work in the world. Treasure the little daily gestures that show love within a family. Affirm all those who do good, whether or not they are “part of our group.”

“Anyone who wants to bring into this world a family which teaches children to be excited by every gesture aimed at overcoming evil — a family which shows that the Spirit is alive and at work — will encounter our gratitude and our appreciation. Whatever the family, people, region, or religion to which they belong!” he said.
– – –
Follow Wooden on Twitter: @Cindy_Wooden.