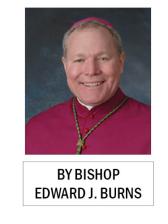 All public policy issues that affect human dignity and human life have both political and moral aspects to them. In light of this, the Church is compelled to speak out on public policy issues of moral consequence and often does. In fact, the Church has a moral obligation to speak out on these issues. In the immigration area, the Church brings special expertise to the table because we are an immigrant Church and we have helped assist immigrants to assimilate into the nation for years. In fact, the Catholic Church’s interest in immigration dates back to the birth of the nation, as our Church is an immigrant Church which has grown with the nation.

As the debate intensifies in Congress over proposed reform to our immigration laws, we should not forget that the Old and New Testaments consistently regard the treatment of foreigners and immigrants as a crucial measure of whether or not a society is just and compassionate. This passage from the Hebrew Scriptures comes to mind: “When an alien resides with you in your land, do not mistreat such a one. You shall treat the alien who resides with you no differently than the natives born among you; you shall love the alien as yourself; for you too were once aliens in the land of Egypt. I, the LORD, am your God.” (Lev.19:33-34)

That is to say, when a migrant (and his/her family), whether here with or without documents, resides in your land, do not mistreat him. We are called to love our neighbors, even our migrant neighbors, regardless of their legal status, as you love yourself – for you too were once migrants, not in the land of Egypt, but here, in America.

The Catholic bishops of the United States support immigration reform. First of all, there needs to be a path to citizenship for the 11 million undocumented people in our country. This is not a show of support for amnesty, but rather a program where those who qualify would have to pay back taxes, a fine, acquire English proficiency, and wait their turn to obtain permanent residency and citizenship. Secondly, family unity, based on the union of a husband and a wife and their children, should remain the cornerstone of our nation’s immigration system. In this regard, the Church supports preserving and improving the family-based immigration system, so that families can reunite more expeditiously.

We know that the majority of migrants who enter our country without legal permission are from the poverty-stricken regions of Mexico and Central America. Like previous generations of immigrants, undocumented immigrants come to the United States hoping to find work to support their families and to escape from poverty and unemployment. At a minimum, we should examine our international economic policies to ascertain whether they inadvertently push low-skilled workers to come to the United States, thus increasing illegal immigration. Migrants have a right not to migrate, so they can support their family in dignity in their home countries. In cooperation with other countries in the region, our nation needs to work for international agreements on trade, debt relief and economic aid that will to eradicate the poverty that drives undocumented immigration.

Alongside my brothers in the US Conference of Catholic Bishops, I support comprehensive immigration reform. This reform should include increased international efforts to end the poverty that drives so much undocumented immigration; a temporary worker program that is fair and just for both migrant and U.S. workers; a path to citizenship for undocumented migrants who can demonstrate good moral character; an end to detention of migrants without charge; a more compassionate approach to evaluating asylum seekers fleeing persecution; and more visas for family reunification.

I am pleased to see that our Alaska Congressional delegation in Washington, DC has come out together in support of immigration reform. In a joint letter to the leadership of the House and Senate, they concluded: “Inspired by the words of our First Alaskans, and deeply committed to an inclusive state and nation, we join today to express our hope that the bipartisan comprehensive immigration reform bill being drafted by our colleagues be brought to the floor of our respective bodies for consideration this session. Like our colleagues drafting the bill, we believe this legislation should secure our border, streamline our legal immigration system and provide a clear and responsible path to citizenship for those already here.”

In St. Matthew’s gospel, Jesus speaks of the end of time when the Lord will come to judge the nations. The criterion Jesus uses is: when I was hungry you fed me, when I was thirsty you gave me something to drink, when I was naked you clothed me, sick or imprisoned you visited me and when I was a stranger you welcomed me, enter into the Kingdom my Father has prepared for you. (Mt. 25)

As we work together to reform our immigration laws, may our society become one that welcomes the stranger and treats them with justice and compassion.