Fifty years ago, on April 11, 1963, Pope John XXIII issued the encyclical “Pacem in Terris” (Peace on Earth).  Written just twenty years after the shattering experience of the Second World War, in the shadow of the Cold War only a few months after the Cuban Missile Crisis threatened the world with nuclear annihilation, Pope John urged the nations of the world to work together to safeguard religious and political liberty; foster social and economic development; begin to dismantle their arsenals of conventional and nuclear weapons and above all, to make peace, so as to uphold the unique dignity of every person and promote the common good. 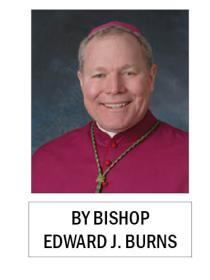 “Pacem in Terris”, which takes its name from the joyous announcement of the birth of Jesus to the shepherds by the angels: “Glory to God in the highest, and on earth peace to those upon whom God’s favor rests!” envisions a world in which individuals, societies and nations seek to uphold individual liberty while working together for peace.

Many of us have been watching the news recently with regards to the reports of nuclear weaponry in North Korea and their leader who continues to threaten its use.  Through all this I have been thinking of Pope John’s urgent letter to the world on peace.  This past Easter, Pope Francis’ first Urbi et Orbi (to the city and to the world) message addressed the need for peace.  With a concern for the global family, he said, “Christ is our peace, and through him we implore peace for all the world.”  He spoke of the peace needed in the Middle East, Iraq, Syria, Africa and in Asia, mentioning specifically the Korean peninsula.

At the same time, here at home in the United States we have the fierce debate within our society and in the Congress over gun violence, individual liberties and the common good.

Too many people are the victims of gun violence, and it is all the more heartbreaking when innocent children are involved.  While guns are not the entire problem, reasonable regulation of firearms is not simply common sense but upholds the common good of society.

In their 1994 pastoral message, “Confronting a Culture of Violence: A Catholic Framework for Action”, the US Catholic bishops wrote:  “We have an obligation to respond. Violence – in our homes, our schools and streets, our nation and world – is destroying the lives, dignity and hopes of millions of our brothers and sisters.”  Both the Vatican and the US Catholic bishops have supported legislation that would regulate possession of firearms.  In 1994 we supported the Assault Weapons Ban, which unfortunately expired in 2004.

Within the current debate on gun control, my brother bishops and I support policies and legislation that would:

·         Improve access to mental health care for those who may be prone to violence.
·         Give priority to providing health services and support to the mentally ill and to their families and caregivers.
·         Require universal background checks for all gun purchasers.
·         Limit civilian access to high-capacity weapons and ammunition magazines.
·         Make gun trafficking a federal crime.
·         Ban assault weapons.

We believe as well that the proliferation of movies, television programs and video games that glorify violence undermine rather than uphold human dignity and the common good.  I believe that the culture of violence as entertainment has corrupted us as a society in two ways.  First, it teaches us to regard recourse to violence as normal and reasonable behavior.  Secondly, the increasingly graphic depiction of violence desensitizes us to the awful human reality of violence and killing.

I believe it is possible for us to become a better, more humane, non-violent society, but only if we work together for reasonable regulation of gun ownership, to help those struggling with mental illness and to end the culture of violence.

Gun violence is a concern for all citizens and it has become all too common.  Tragic events that occur in our homes, schools or communities as well as escalating threats of attack between countries should prompt us to adhere to Pope Francis’ call to “change hatred into love, vengeance into forgiveness, war into peace.”