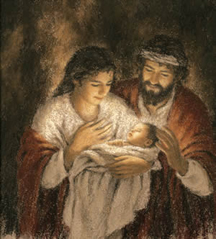 Every time he saw her it was the same. His pulse quickened, his cheeks flushed and something within him started spinning into life.

Joseph could not understand these feelings, they were yet so new. How was it possible? He, a grown man for some years now. She, a mere slip of a Jewish girl. How could the mere sight of her both fluster him and bring him joy?

How was it that this woman child could bring about such a reaction? What was there about her that made Joseph feel both strong and protective yet awkward and clumsy?

Questions. Nothing but questions since he’d met her. She was a mystery to Joseph. She was innocent as a child, lovely as a woman and now—she was his wife. His wife! Even the word felt strange upon his tongue.

He remembered the first time he saw her, walking toward the river with her water jug up on one shoulder. Slender young hips swaying gracefully, the hem of her dress was caught up at her waist, her sandaled feet deftly making their way among the rocks and boulders of the bank. And upon her brow, a thin veil flowed out, streaming in the wind, mingling with long black hair.

He must have loved her even then. As he did now.

Strange how events unfold in your life at times and you are powerless to stop their flow, even if you wished it, or understood it.

Joseph remembered how amazed he was when he found himself among the number of young men of Nazareth vying for a young girl’s hand in Holy Union. How often he had dreamed of her. And not even known her name.

Then there she was, the girl named Mary, quietly walking before each young man, pausing, then moving on. Joseph remembered too how loudly his heart beat as she approached him, till he thought surely she must hear it pounding against his ribs. She had stopped – right before him! Slowly, she lifted her wide blue eyes to his and very calmly, for one so young, she simply placed her small hand on his rough carpenter’s hand and smilingly said, “I take thee, Joseph, for my husband.” And they were betrothed.

He would never forget the rush of joy! The pride, love, gratitude and tenderness he felt for this maiden. He would cherish her always.

That was months ago.

Since then, unfolding events included a rumor that Mary was with child. Yet he had not known her as a man knows a woman. How could this be? Then an angel had roused him from slumber. He assured Joseph that Mary was chosen among all women by God himself to be the other of His only Son. Joseph was to take Mary to wife and protect her from harm. This he did. And willingly as she had greater need of him than ever.

What a strange pair they made, this older Joseph and the very young Jewish maiden, with child, but not of him.

How he loved her! He would never abandon her but would see to her every need and comfort, humble as were their means.

Comfort? What comfort had he given her? A lump formed in his throat. Nearing Mary’s time they had been uprooted by Caesar Augustus’ decree that all peoples go to their place of origin to be counted. Yet even during the jolting, jarring journey upon the mule, Mary never complained. What an exceptional woman she was. She uttered no protest when the only lodging to be found in the swelling village of Bethlehem was a stable for animals.

Now, an anguished cry broke form Mary’s lips and into Joseph’s reverie. Even in the throes of labor, she was beautiful. She clutched Joseph’s hand while his other wiped her flushed perspiring face. He spoke soothingly to her.

Joseph never felt so helpless. And he prayed. Finally, with a great moaning effort, and a rush of birthing fluids, the child slid unto clean straw and into the silent night. While Mary gathered breath and strength, Joseph cleaned the child, would soft swaddling about him and placed him in her arms. Their son!

Never had Mary looked so radiant! There was truly something heavenly about this mother and child. God chose Mary and Mary had chosen him to be part of this Holy Family. Joseph felt a tightening in his chest. He was honored yet humbled beyond words.

Heavenly voices were singing, “For unto us a child is born. A Savior who shall be for all peoples.”

Joseph shook his head. He did not fully understand these unfolding events. But in the depths of his being, he knew this child, this Holy Babe given into his care, would one day lead the world out of darkness into light. And as he gazed with wonder upon the woman and child, his heart was filled with exceeding joy!

Thus it came to pass that this was the scene that greeted the shepherds that silent holy night. And they fell to their knees and adored the Child.